Our idea is a DIY instruction manual for top-to-bottom plant curtains. It stands for climate action and more urban quality of life. The idea makes kinetic, vertical gardening possible all over the world. We call the mechanism Bioblinds. The actual gaps (glass facades like e.g. windows and doors) in vertical farming can be closed by the kinetic aspect. With these functional Bioblinds every house facade can be vegetated and developed into a garden with agricultural and social potentials. We are not profit orientated. The CC BY 4.0 licence for our impulse-instruction-manuals ensure that the idea and mechanism can be copied and adapted by, theoretically, every person globally. By mainly using open-source technology, we want to involve as many people as possible.We aimed at creating a mechanism that can be applied by every person worldwide with normal tools from any hardware or plant store. By providing the impulse instruction manual for free, our vision of future gardens are clear: Every facade can be vegetated in a functional way – Skylines become green. Right now we work on two further prototypes next to the ivy prototype: a 120m long Bioblinds construction out of roses for cows in a cowshed and a prototype for edible plants that can also function inside.

What is innovative about the idea?
1) First to mention is a change in the perception of flower pots: Bioblinds grow in a top-to-bottom direction. This means that the tendril plants are positioned above the window or door.
2) A further innovative part is the kinetic aspect in order to vegetate glass surfaces in a functional way. Also with edible plants.
3) The fact alone that we handle, organize and structure the idea as a commons.
4) Bioblinds is a ‚Speculative Design‘ commons for permaculture that wants humans to vegetate and cultivate their own facades for everybody’s benefit.
5) Our vision is a free ‚augmented-reality configurator app‘ to make the idea even more inclusive. People could look through their phone cameras at any window and, immediately, get instruction impulses, plant recommendations and shopping lists, for how to build their own vertical, kinetic garden with the potential to grow their own food.

What are the social aspects of the idea?
1) It is a Do-It-Yourself mechanism. Ergo everybody is able to do it.
2) The CC BY 4.0 licence ensures that the idea and mechanism can be copied and adapted by, theoretically, every person globally, but the license prohibits any commercial use without prior agreement from our side – and we want the idea to be for free.
3) The necessary products can be bought with little money in every plant- and handy/hardware-store.
4) It increases biodiversity, CO2 compensation, oxygen production, and allows for thermal isolation at possibly every window or door.
5) Therefore, it helps psychological well-being through calming views and potentially ‚upgrades‘ every housing possibility.
6) Especially in this context, the idea originally aims at social housings.
7) By using open-source technology for the hub (bioblinds.com/bioblinds-hub/), we want to involve as many people as possible – not only for the instructions manual(s), but also for the backend and programming.

Bioblinds promote community in 5 dimensions:
1) The preparation, building and cultivating phase: As soon as you plan, shop and construct elements of your Bioblinds, you interact with your local community and the global Bioblinds community.
2) The initiative: The Bioblinds community is connected via the vision of ‘The Green Skyline Initiative’.
3) Collaboration possibilities: As we are currently building further prototypes for edible plants (kiwi, berry) and cowsheds (roses), we can witness that each new interpretation of Bioblinds fosters a new community. We aim to increase these collaborations by using the platform economy’s possibilities in form of open-source and cloud services.
4) Bioblinds as an expansion of housings: As outdoor blinds for your personal housing, Bioblinds allow you to interact with your outside human and natural environment (e.g. more butterflies infront of your window).
5) Bioblinds as a gate: Bioblinds, constructed as gates, bring people physically together. 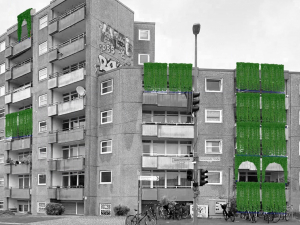